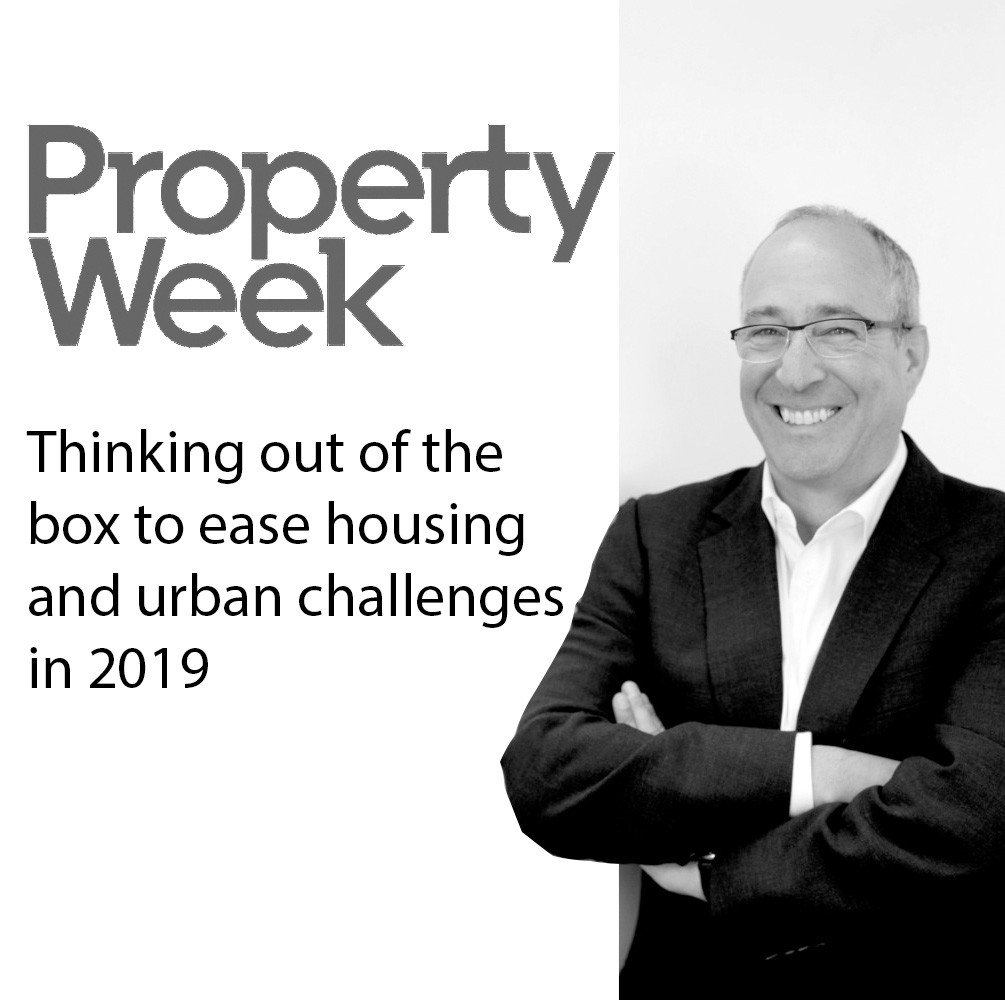 Homes England is now the only government housing agency tasked with solving the housing issue and has £1bn in funding to support ‘disruptive behaviour’ to help find solutions.

It’s clear there are major opportunities to both release existing housing stock and also turn the current model of building new homes to sell on its head. And if we box clever, we might also be able to save our dying high streets at the same time.

According to Savills, close to three trillion pound’s worth of property (around three quarters of the total value of private property) is in senior citizen’s hands. There is a huge reservoir of wealth and under-provision that seeks an outlet. We need to think ahead a generation and create a virtuous circle – several in fact, including:

The cash liberated by downsizing can be used to provide a nest-egg for future care and this provides an opportunity for the NHS and other agencies to respond with services that are more conveniently accessed by the elderly and which respond to the notion of ‘health’ rather than ‘illness’. According to Strutt and Parker 73% of the Platinum generation has no plan for their retirement accommodation or care provision – they need to be incentivised to get going.

There is an opportunity to save struggling neighbourhoods by transforming high streets into ‘health streets’ offering blood and cholesterol checks, MRI’s and scans, dentists and orthodontists, nutritionists and dieticians; physiotherapists and cranial osteopaths. These wellbeing services cater not only to the ‘greyby boomers’, but the whole community. Thereby we will enable our ‘seniors’ to move to generous apartments, adaptable for when they are less mobile and convenient for robots to swish around doing the drudgery, together with better access to public amenities, suited to their needs. In thinking about increasing the number of homes, the Ministry for Housing Communities and Local Government must consider how to encourage and retain such public amenities at lower levels, perhaps with new dwellings above.

This is an emerging dynamic in the US already where, according to Ellen Dunham-Jones and June Williamson, one third of enclosed malls are dead or dying.’’ They are being reimagined and re-inhabited for many different purposes to serve the communities that have grown up around them. Of great interest, are the medical malls that emerged to serve over 20m new health shoppers created by the 2010 ‘Obamacare’ Act. Malls deliver the whole suite of basic medical and specialist services in heart-health, weight loss, imaging and dermatology. Many are focused on the elderly but once critical mass is achieved a more general offer, such as paediatrics and women’s health, will become available.

Increasingly complex medical services can now be delivered at surgeries being fitted out in converted rather than purpose built buildings. In Denmark and the USA, pioneering ambulatory orthopaedic surgical care allows you to arrive in the morning and depart with a new hip or knee after lunch – and the NHS is now commencing such procedures.

Housing development should be turned on its head in order to speed up production. Developers are accused of building too slowly once they have secured planning permission for large scale housing projects. They build slowly because of the huge financial risks involved in predicting whether homes can be absorbed by the local market once completed.

A while back, car dealers had a similar problem – purchasing models from manufacturers hoping they had anticipated correctly and they would be snapped up by buyers from their forecourts, a risky and wasteful process. Today, manufacturers have mostly displaced dealers with showrooms that allow buyers to specify their car before it is manufactured. Likewise, home-buyers should be able to order and choose what they want, customising their own home in advance from a predetermined set of possibilities. Tracts of land can be prepared for various models of dwelling, outline consents granted for a range of possibilities and homes delivered once purchased.

Easy to see how this might work with houses as this is roughly how our cities were built during Victorian and Edwardian times by builders using pattern books. Harder with today’s more granular (and elderly) population that requires apartments, rather than free standing dwellings.

But apartments can be catalysed by using a crowdfunding model, which encourages early sign up by offering discounts manipulating prices, as airlines do, to encourage their planes to fly at capacity. The crowdfunding model is already being trialled in the UK, for instance by Abundance working with developer Octevo on affordable homes in Merseyside, but here the objective is investment and funding rather than purchasing eight.

Flats have to be sold or at least a minimum number need to be committed to in advance before construction of an apartment building commences. There are opportunities also for buyers to purchase a basic home and later (prior to or possibly after construction) to have flexibility on internal design alternatives or even location. Using the airline analogy – akin to adding bags or swapping seats. But the process and quality of outcome will need very careful monitoring by National House-Building Council (NHBC) or other agencies and will only really become reliable when homes are manufactured off-site rather than hand made as at present.

If executed in the right way, the result would be that a new virtual community is created before the development is built. We saw this years ago, when we worked with the Coin Street Community Builders (CSCB) – a not for profit centred on London’s South Bank. This was a successful example of a community that created a new neighbourhood complete with affordable co-op housing in several developments including at the Oxo Tower and Broadwall and also workshops, shops and restaurants – the latter to provide revenue and subsidy. CSCB had selected candidates for these new homes well before they were completed. Some were encouraged to sit on panels to guide the emerging designs but all were required to attend training courses in finance, maintenance and governance so that they were equipped to manage their homes sustainably with minimum landlord involvement. The approach was a great success in creating skills and cohesion. In future, a similar process could be hosted by social media helping to create online communities that become live when everybody moves in.