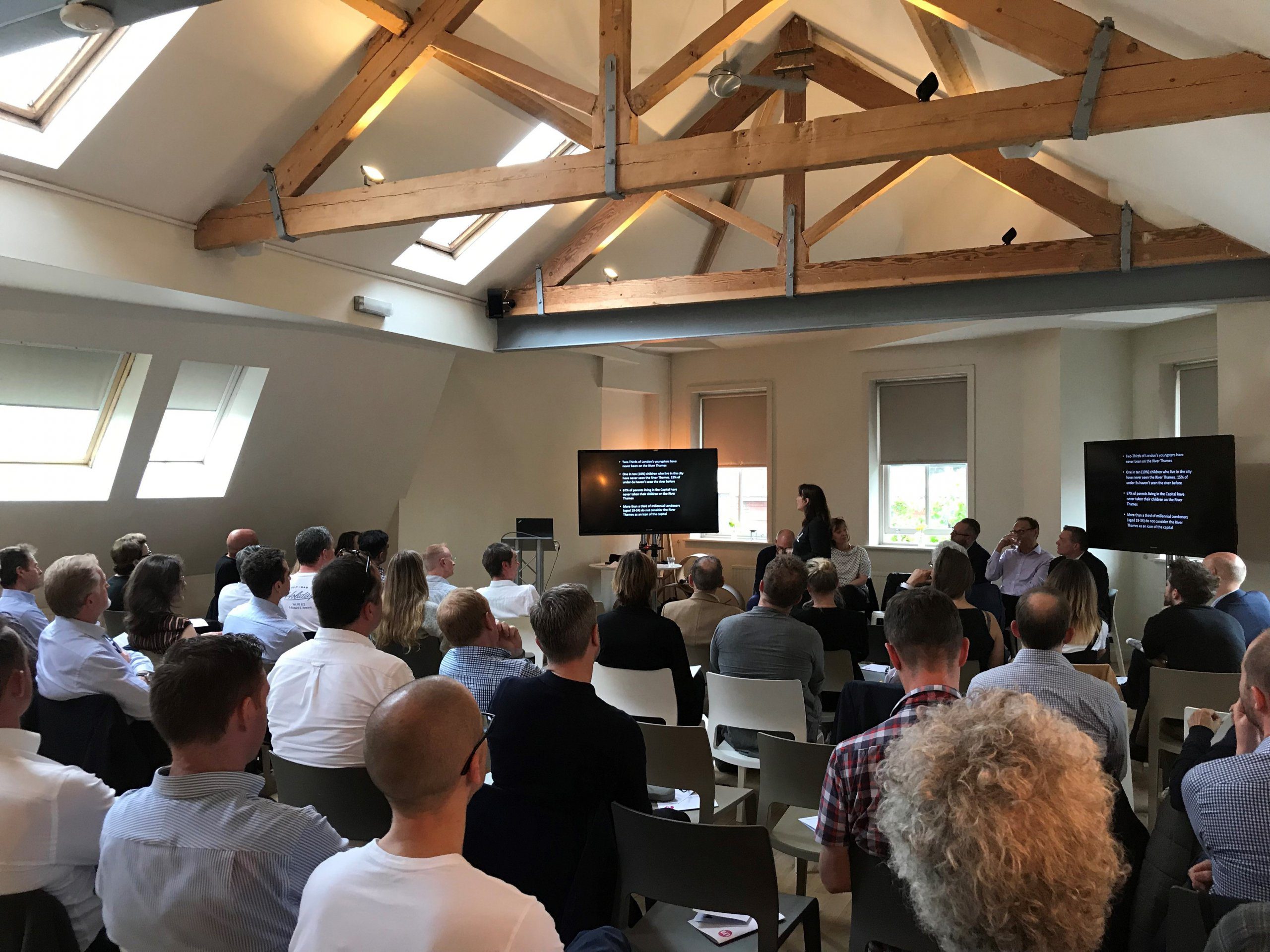 Thames Connections: past, present and future
London Festival of Architecture 2019

Nothing unites and divides London like the Thames and, with London’s population ever-growing, there is a clear need for further connections with the river as well as crossings over it. In our second annual London Festival of Architecture debate, we celebrated, investigated and analysed our connections to the Thames and its crossings – past, present and future, unlocking London’s potential and celebrating the river. The discussion brought together experts and enthusiasts from the worlds of local government and public art, transport planning and marine engineering, all of whom we have collaborated with on projects as diverse as the residential-led Barking Riverside masterplan and the huge public art project, Illuminated River.

A new/old centre of London?

Darren has a vision to create a “Barcelona on the Thames” at Barking Riverside, a huge regeneration project on London’s largest brownfield site for which we are masterplanners. But while his priorities are local (“it’s the local people who make the place”) his ambitions are global. “Let’s make sure the East of London is well-connected, because if not, we’re losing our connection with the rest of the world.”

The need to increase connections within and beyond the borough was developed by Chris Naylor, Barking and Dagenham’s Chief Executive, who offered further insight into the inequalities that have arisen from longstanding failures in both housing provision and transport infrastructure. He explored the benefits of burying the A13 to create better connections, reduce pollution and unlock land for redevelopment, and of encouraging growth through the Council’s ‘Be First’ social enterprise, which is bringing together planning and developing expertise for Barking Riverside.
However, both Darren and Chris were clear that Barking and Dagenham’s original expansion in the 1920s depended on infrastructure investment by the UK government, which Ford motor cars consolidated and built upon. What is missing now is any long-term thinking or financial support from the UK national government, which has led to a burgeoning relationship with representatives of China’s belt and road initiative, who see Barking and Dagenham as a key gateway to London.

Lighting up the city at night

Sarah Gaventa, Director of the Illuminated River Foundation, gave a very different perspective on the potential the Thames has for London’s pre-eminence as a world city.

While acknowledging the need for more connections for the East End, her focus is on an ambitious scheme to light 15 central London bridges at night, brought together by our studio in collaboration with the artist Leo Villareal. But Sarah demonstrated how Illuminated River is much more than simply a huge public art project.

It is estimated the project will be seen by over 200,000 people per year, with the potential to increase wellbeing in the capital as they delight in Villareal’s beautiful artwork. One in ten London children has never seen the river Thames, and she sees the project as an opportunity to reconnect communities who live near the Thames but don’t have access to it. The project is also an opportunity to reduce light pollution for the wildlife that lives in and around the river. “There are 135 species of fish in the Thames, none of whom like to have sex with the lights on.”

Sarah talked of the challenges of creating such a project, which has involved 30 planning applications and 18 listed buildings in separate conversations with numerous, disconnected London boroughs. But she was also persuasive about the economic benefits to the capital, offering London an opportunity to gain pre-eminence over other major cities such as Paris, and the simple joy and calm to be had at an otherwise troubled time. “What else are we going to have to celebrate for the next few months?”

Three speakers then gave an insight into transport planning at both a macro and micro level.

Julie Bowerman, a Director at Steer, has experience in transport planning in the private and public sector, and has led numerous projects across London. But what started for her as a review of the impact of CAVs in how they may help us better connect our city and encourage pedestrians and cyclists expanded into a broader look at how transport priorities in the capital are changing. Population growth, lack of housing provision and a transport system under strain increase the need and demand for initiatives such as shared transport and increased cycle routes.
But while crossing the river is part of the journey, it cannot be divorced from the routes that lie either side. “Technology won’t change the way we use bridges, but they will change the way we think about the journeys we need to take.”

Crossing the river was of specific interest to Tim Beckett, Founding Director of Marine Consultancy Beckett Rankine, who has been responsible for the design of more than 200 projects on the tidal Thames.

His innovative scheme for state-of-the-art electric ferries – already a reality in Sweden and Finland – could revolutionise our approach to the water. The creation of new ferry crossings offer a nimble, relatively low-cost solution to increase connections at key locations in the east of London such as Canary Wharf, where there is neither the money nor the vision for the creation of a bridge. Perhaps where public funding is not forthcoming, private sector investment could plug some of the gaps as we move deeper into the coming century.

Alex Lifschutz, Founding Director of Lifschutz Davidson Sandilands, rounded up the discussion with a description of the Thames Barrier Bridge, an idea for a new, low-level pedestrian and cycle bridge to connect the Royal Borough of Greenwich with the Royal Docks. The 530-metre long bridge is a multi-span bascule bridge that would be situated immediately upstream of the Thames Barrier, so impact on the flow of the river would be lessened. Most boats would be able to pass underneath, but when larger boats do wish to pass through, the multiple piers, each with their own bascules, create a series of small, moveable bridges with their own opening spans. This provides certainty that at least one section of the bridge will open when it is needed.

It’s an idea that is so simple, one wonders why it hasn’t happened already, but it does come with a caveat: “we have approached TfL but the door is closed because they don’t have a penny to spend,” Alex explained.

Apart from the enthusiasm from each speaker for the new and exciting projects that could shape life along the Thames in the years ahead, the other major theme was the scarcity of funds for these new projects to become a reality. “So what,” Alex asked, “is the mechanism for celebrating and rewarding all these varied ideas?”

Everyone was united in agreement that London needs more bridges, tunnels and ferries, but how do we ensure the city’s continued success by getting such projects built?
The danger of failing to provide sufficient connections is stark. “Lack of infrastructure is the prime cause of social inequality in the East End,” said Chris Naylor. But there was consensus that the political vision and leadership required to deliver such connections through infrastructure is just not there at present.

Sarah Gaventa was positive about the potential for philanthropy to contribute to more projects (Illuminated River is being funded by the Arcadia Fund and the Rothschild Foundation), but the kind of funding necessary for a venture such as burying the A13 (approximately £9billion) is only going to come from central government – if not ours then someone else’s.