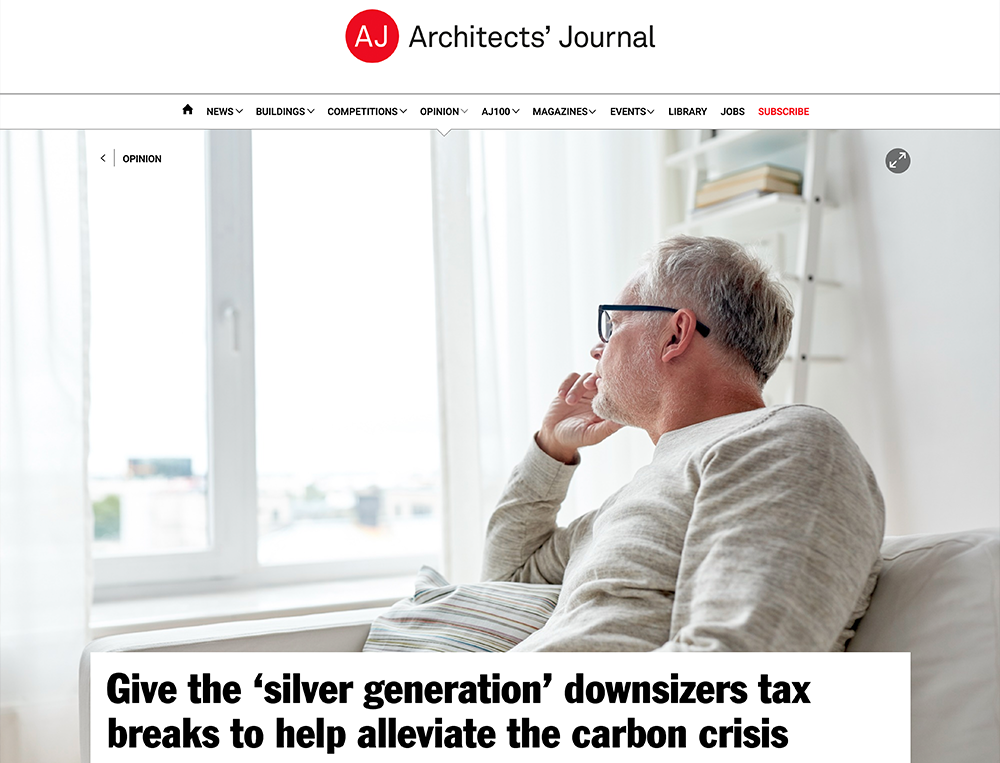 Instead of wasting money and carbon on cramped new homes, let’s use tax policy to tackle under-occupation by the elderly, says Alex Lifschutz Bill Gates’ observation that ‘most people overestimate what they can do in one year and underestimate what they can do in 10 years’ seems hugely relevant if we only have a decade to stop the planet from catastrophic temperature rises.

Housing is a big part of the solution but the chancellor’s recent £3 billion bung is yet another example of an emphasis on one-year, rather than 10-year solutions – an apparently positive move with unknown and unintended consequences. As a result, we need to ask: just what is the Treasury’s game plan?

My advice to Chancellor Hammond is that he pause for a moment to think what housing and energy solutions are needed and uses tax incentives to create a housing sector that is more efficient, more flexible and which stimulates community and sharing from cradle to grave.

Although there are, tellingly, no definitive figures, I reckon that he’s currently spending around £35 billion a year subsidising housing through Housing Benefit, grants and loan guarantees.

But what do we get for our money? An ageing stock with insufficient new homes for our population (over the past decades an average of 180,000 of the 300,000 needed, of which just 20,000 last year were affordable), many not built to last long enough to justify their embodied carbon, and more that are pinched and can’t adapt to change.

So how should we spend our money more wisely?

Firstly, we should make the most of existing stock, which means tackling the inefficiencies of under-occupation (defined as two rooms or more unused). And no, another egregious bedroom tax is not the answer. According to the Ministry of Housing, Communities and Local Government, it is the owner-occupied sector that is under- occupied (around 50 per cent, or 7.3 million households in England alone, equivalent to 2.5 million two-bedroom apartments or 100 million tonnes of carbon), whereas around 0.5 million homes are over-occupied in the affordable and private rented sectors.

Let’s give tax breaks on the purchase of homes where under-occupation is replaced by efficient occupation.

Under-occupiers are mostly older folk like me (who, according to Savills, own around three-quarters of total UK property), but they and others are deterred from selling their houses by a range of taxes. This in turn disadvantages the people who need the space, requiring – guess what – more carbon-hungry housebuilding bungs.

So, let’s create a more virtuous kind of circle, one that optimises occupancy, by giving tax breaks on Stamp Duty Land Tax on the purchase of homes where under-occupation is replaced by efficient occupation. And let’s give elderly downsizers inheritance tax breaks on the funds released or income tax discounts on the investment income from that surplus money, creating useful cash pensions, rather than ones that idle away in bricks and mortar.

Secondly, when we build new, we should build for the long term, preserving embodied energy in larger, more flexible dwellings with longer more useful lives – ones that are more amenable to sharing, which is in itself a more sustainable model of habitation. Unfortunately, the government’s Help to Buy scheme has done the opposite, encouraging developers to produce smaller, cheaper dwellings for atomised households that are inflexible to change.

And governments since the 1990s have furthered this inefficiency with the married person’s tax policy, which only allows a husband, wife or civil partner to transfer £1,190 (about 10 per cent) of their Personal Allowance, thus discouraging single-earner couples from living together and incidentally ignoring the extra cost of raising children.

The principles of flexibility and sharing can be extended to the ‘silvergeneration’, saving money and staving off lonliness.

So, let’s use tax policy to catalyse the creation of spacious, flexible apartments above the minimum Nationally Described Space standards, and let’s make them attractive to sharers, especially co-habiting couples.

These twin principles of flexibility and sharing can be extended to the ‘silver generation’, saving further money and staving off loneliness in the process. The active elderly are savvy enough to want apartments that are easily adaptable for their extreme age, and many are all too aware of the downside of living alone; 3.6 million older people in the UK already do and, according to The Guardian, three-quarters of them are lonely.

Japan has already woken up to the need for flexibility; there are tax breaks for developers building to a 2008 Act that encourages easily adaptable, long-life homes, and flexible home environments further provide the best environment for the robots that will surely replace human carers, at least in part.

And with sharing the norm from childhood to young adulthood and family life, why shouldn’t more pensioners also live together and care for each other, reducing the burden on the £265 billion welfare budget?

So, instead of wasting our money and carbon for yet another 10 years on cramped new homes, let’s look at tax policy and social behaviour in the round, and see whether there are better ways to manage the resources we have – before we consume them and our planet.

Alex Lifschutz is a founding director of Lifschutz Davidson Sandilands

Read the full article at https://www.architectsjournal.co.uk